SAO PAULO (RNS) – In a recording allegedly made of a meeting with Brazilian mayors, President Jair Bolsonaro’s Minister of Education, a Presbyterian pastor named Milton Ribeiro, can be heard saying he routed funds to local governments under another evangelical leader. .

“My priority is to take care of the most necessary municipalities first and secondly to take care of everything that is (administered by) the friends of Pastor Gilmar,” Ribeiro told the mayors in a recording. published by Brazilian newspaper Folha de S. Paulo on March 21. “It was the special request of the president of the republic to me.”

The reference appears to be to Gilmar Santos, the pastor of an Assemblies of God ministry named “Christ for All” and head of the National Convention of Assemblies of God Churches and Ministers, known by the Portuguese acronym Conimadb. Ribeiro also mentions Pastor Arilton Moura, another Conimadb leader, as an intermediary between his ministry and the municipalities.

According to another report last week, this one in the newspaper O Estado de São Paulo, the two pastors, who have been spotted with Bolsonaro at official events at least since 2019, form a “clandestine cabinet” in the ministry of education.

Since the beginning of 2021, according to Folha de S. Paulo, pastors have been negotiating with municipal governments over the release of ministry funds for school buildings and computers, day care centers and other facilities.

Gilberto Braga, mayor of Luis Domingues, a small town in the northern state of Maranhão, also told O Estado de São Paulo that pastor Moura asked him for a kilogram (2.2 pounds) of gold in exchange for the funds. of the ministry for the city.

Given the current price of gold, the bribes demanded by Moura would amount to $62,340. The meeting took place in April 2021 in Brasilia. Braga said he doesn’t accept Moura’s request.

On March 22, Ribeiro released a statement saying he was not favoring any municipality with ministry funds. He also denied that the president asked him to attend any requests made by Pastor Santos’ friends. Bolsonaro has not mentioned the scandal since becoming public.

“The President of the Republic did not ask me to offer special treatment to anyone; he only asked me to greet everyone who came to see me, including those mentioned in the report,” the statement read.

Ribeiro added that the funds are distributed among the municipalities according to parameters established by law. “There is no possibility for the minister to determine the allocation of funds to favor or oppose a municipality or a state,” the statement said.

On March 24, Bolsonaro defended Ribeiro during a live stream on social media, saying he trusted him with his life and was a victim of cowards. He also mentioned that the political groups wanted him to fire Ribeiro in order to come up with another name to replace him.

Before joining Bolsonaro’s cabinet, Ribeiro was a prominent member of the country’s main branch of Presbyterianism, the Presbyterian Church of Brazil. Known as the IPB, the denomination has some 650,000 followers.

Opposition members of Brazil’s National Congress denounced Ribeiro in the Supreme Court on March 22 and demanded his resignation. On March 24, Supreme Court Justice Cármen Lúcia authorized the attorney general’s office to open an investigation into the case.

Evangelicals in Brazil’s Legislative Assembly, one of the strongest blocs with 200 members, tried to distance themselves from Ribeiro. An evangelical pastor who served as an adviser to the bloc for several years told Religion News Service that they anticipate Ribeiro will have to step down.

“The current administration has many members who are inexperienced in politics and media relations,” said the pastor, who requested anonymity. “People have to be careful what they say. Every one of his days in office will now be bad (for the government),” the adviser said.

He said the Evangelical bloc was not calling for Ribeiro’s dismissal and wanted to “remain neutral” in the face of the scandal, noting that “he was not responsible for suggesting Ribeiro be Bolsonaro’s minister”.

According to Andrew Chesnut, a professor and religious studies expert at Virginia Commonwealth University, evangelicals are concerned about the impact of the scandal on the upcoming elections in October, when a new president and new members of Congress will be elected.

“Of course, the evangelical bloc is doing everything possible to distance itself from the Ribeiro scandal, but it may be too late for the next election cycle,” he told RNS.

Chesnut pointed out that the case “reveals the unprecedented evangelical – especially Pentecostal – influence on the Brazilian body politic.”

“Just as white evangelicals were Trump’s political base, evangelicals are the hard core of the Brazilian president,” he said.

Alexandre Landim, a sociologist specializing in the relationship between religion and presidential elections in Brazil, told RNS that Bolsonaro offered the Christian right “the fulfillment of its long-held political aspiration to become Brazil’s civic religion”. 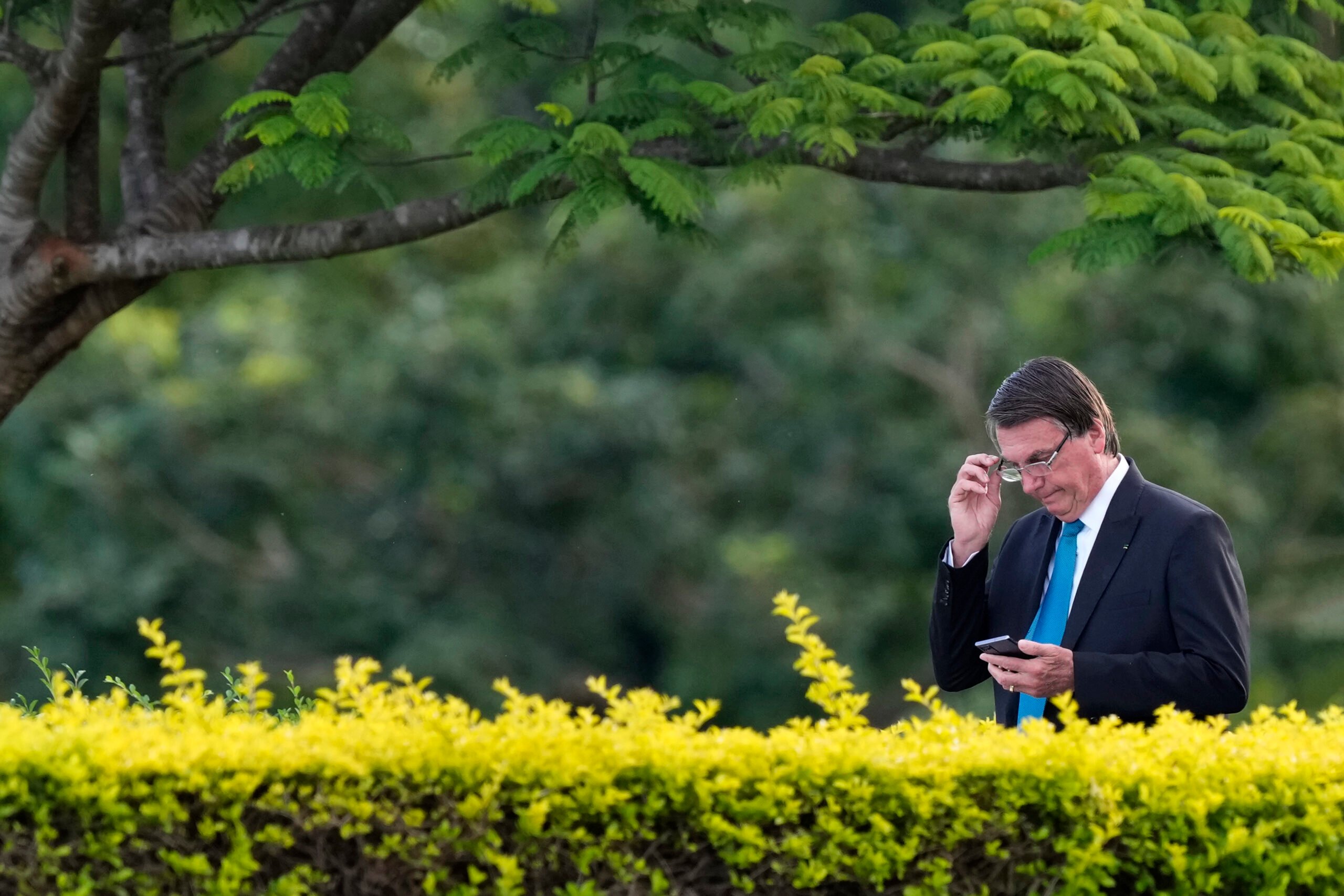 Brazilian President Jair Bolsonaro looks at his cellphone as he arrives for a flag-raising ceremony outside the Alvorada Palace, in Brasilia, Brazil, Thursday, March 17, 2022. (AP Photo/Eraldo Peres)

“Ribeiro’s recording clearly demonstrates that evangelicals have been favored by the current administration. They have unprecedented power now,” he said.

Landim recalled that Bolsonaro is not evangelical – he identifies as Roman Catholic, while his third wife is evangelical – but that he represents conservative Christians in general.

“This segment saw him as the man who could give him the share of power he wanted since the 1980s. But these leaders are pragmatic and will not stay with him if his re-election is not possible,” he said. -he assures.

Recent polls show that Luiz Inácio Lula da Silva, a former president who is running again in the fall elections, ahead of Bolsonaro, has worked successfully to attract support from evangelicals. A corruption scandal like Ribeiro’s could speed up the process.

“Most evangelical leaders will probably continue to support Bolsonaro now,” Landim said. “But if in September it becomes clear that he won’t be victorious, they will probably leave him and support Lula.”