In the 1850s, the town known as The Sulfur Springs was just beginning to coalesce. It was what would become the third town in Hopkins County, after Sulfur Bluff and Tarrant. In early pioneer life, religion was one of its mainstays, and the people of the new town would gather in vacant homes and stores to study the gospel.

In 1870, Revered Charles Carlton and Revered J. M. Baird organized one of the city’s first full-time congregations, known as the First Christian Church. After twenty years of meeting, the group had twenty dedicated members.

In 1887 they purchased land at Van Sickle and North Davis streets near Magnolia and Connally. This lot was much smaller and only cost the church $187.50. They built a Gothic-style chapel with a steep roof, high arched windows, a central spire and a bell tower. There was no electricity at the time, so the domes contained kerosene lamps.

In 1891, the Church’s Ladies’ Aid Society raised funds to purchase more land for the church, raising $2,500 and purchasing two additional lots to the south. However, in 1912 the lots were purchased to build the new post office, priced at $1,500 each.

In 1914, they made this structure more permanent by building it out of white brick. In 1938, the church was packed and needed expansion. So the church added what was called the Educational Building for Youth Services. Yet by 1954 the educational building was in need of replacement and another round of expansion due to wear and tear and the growing number of children in need of services. 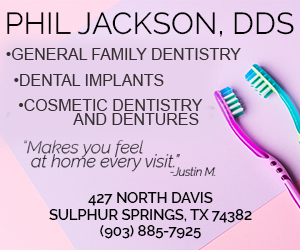 The church began its fundraising efforts hoping to raise $17,000, but instead its generous patrons provided $41,000. The two-story brick building they erected, with nine classrooms, a kitchen, library, and oak finishes, still stands today. 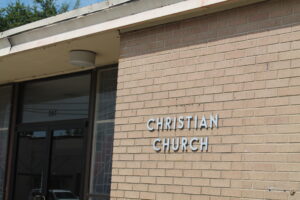 In 1962, the church replaced the sanctuary portion of the structure entirely. The original 1914 shrine had held its place, but what replaced it is the landmark many recognize today in downtown Sulfur Springs. The stained glass “fish”, on North Davis Street in particular, stands out among the churches of Sulfur Springs as a harbinger of the mod era in which the sanctuary was built.

“Buildings do not tell the story of a church,” wrote First Christian Church historian Sidney Brice. “It’s more the essence of the church story.” In its nearly 150 years as a congregation, the First Christian Church has gone through four full iterations of church buildings, not counting the various homes and storefronts they gathered in during the county’s early days. of Hopkins. 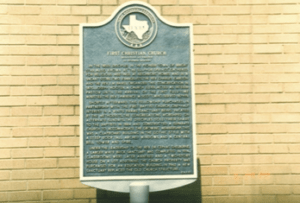 When the light enters through the hearth of the First Christian Church and strikes the right stained glass fish, perhaps its ancient congregation can reflect that even as times, buildings and architectural styles change, they may not be still together in the building, but they will still be the first Christian church.