“Kendrick got you thinking, but he’s not your savior,” comes a voice from the speakers before Kendrick Lamar begins the very last song of his Glastonbury title track. What then of the crown of thorns he wears on his head? What are we to think of the way he performs “Humble” while turning directly to the camera and staring at it in absolute confidence with the sight of 100,000 adoring fans in the background? What about ‘King Kunta’, where he turns and stares into a mirror that splits the screen behind him in half as he raps? It speaks to the tangle of contradictions that make his setting, and his work in general, so engaging, the war between ego and vulnerability, human nature seen as a mixture of contradictory thoughts and opposing urges, the denial of Lamar to adhere to simplistic binary thinking and to embrace the messy multiplicity of human experience instead.

His new album Mr. Morale and Big Steps has been rightly acclaimed for his skillful navigation of personal demons, ego journeys, spiritual growth and the complexity of modern morality – as well as his status as one of the world’s most famous rappers and effects it has on the psyche. In the video for the standalone track that preceded its release, “The Heart Part 5”, deepfake technology was used to allow Lamar’s face to continuously transform into that of many black American cultural icons, many of whose flaws have been exposed. important – Kanye West, Will Smith, Kobe Bryant, OJ Simpson and many others – as if searching in vain for a path to follow. Although the set is actually lighter on the new material than one might expect, Lamar begins his set by embodying this theme with ‘United In Grief’, the opener to Mr Morale who continues to zigzag between self-indulgence and self-criticism — “I cry differently,” Lamar proclaims. “Everyone cries differently,” retorts a disinterested tongue-in-cheek from the backing track.

Throughout the Glastonbury weekend there were the usual rumors of special guests for this show, the way Paul McCartney brought out Dave Grohl and Bruce Springsteen the day before for example. From what I hear, people are convinced it will be either Drake, or Eminem, or maybe even Stormzy who’s been spotted backstage, but in the end, Lamar is performing entirely alone; there’s not even a live backing band. Sounds like a statement in itself – if his most recent art is an exercise in immersive self-analysis, this show has to be his alone. Lamar is however joined by two groups of dancers, men in crisp white shirts and black pants to match Lamar’s, and a red rope over each left shoulder, and women in flowing red dresses that are choreographed with absolute precision.

Often the male dancers move in such a way that they could be extensions of Lamar’s psyche. Often they all move in perfect time with their eyes all fixed on the same point, sometimes they go off in different directions behind him as if to represent all the multitudes in one mind, and at others circle around him like spiral thoughts. Women move in reverse, drifting and sliding where men are jerky and intense. Sometimes they have an otherworldly presence, with one leading Lamar by the hand as his head is bowed, after which he performs one of Mr. Morale‘Crown’s most introspective songs as they elegantly melt around him; at one point the male dancers stand stiff and tense before, one by one, the women touch them on the head and send them sagging as if casting a spell. When he performs “Swimming Pools (Drank)”, two men who stand out from the rest with their bright pink hair dance together with a movement somewhere between these two extremes. 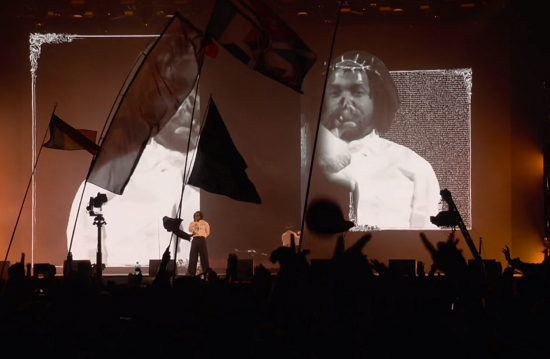 On the surface level, it makes for an incredible spectacle for those watching, and Lamar never lets the ingenuity of the set cloud the occasion. He makes sure to load up the opening section with a slew of crowdpleasers from 2012 good kid, maAd city which includes a fast-paced series of “mAAd city”, “Money Trees”, “Backseat Freestyle”, “The Art Of Peer Pressure”, the aforementioned “Swimming Pools (Drank)” and “Poetic Justice”, and keeps the energy rising soaring high and the crowd engaged. The level of focus you can see in his eyes as he plays would be magnetic to any song. The emotional peaks and troughs that accompany Lamar’s multi-directional lyrical focus, from the joyful “I love myself” chorus of “i” and the hazy self-destruction of “Swimming Pools”, to the swagger of “Backseat Freestyle” and the intense vulnerability of ‘Count Me Out’.

That, at its core, is what makes the set special, the way Lamar can marry high-level concept art with mass accessibility. It’s conclusive proof that a set of tracks can be cutting edge, proof to the contrary of the kind of naysayers who prefer to watch one of the indie rock bands that seem to have hovered around every other festival track in Britain for the last time. decade. And incidentally, there are moments in Lamar’s ensemble that are more communal than any “Wonderwall” chant. “Alright” is the most obvious, where the chorus is picked up powerfully by the crowd as thousands jump up and down with their hands in the air. Other moments are more subtle; “Anyone fighting stress? Lamar asks on ‘Count Me Out’.

It’s important to note, however, that the whole thing isn’t quite as simple as Lamar providing a template for the audience to project their own lives onto. He invites his audience to look within themselves, but while there are many universal truths to be found in his words, many come from a place that can only be his own; good kid maad city, for example, is nothing if not a stylized autobiography of his experiences as a teenager in Compton – a world far removed from the predominantly white, middle-class environs of Worthy Farm. It’s unclear if he hears it when the crowd begins chanting his name to the tune of “Seven Nation Army”, the most British of displays of affection, but if he does, he must surely find that it’s an unusual disconnect. Communal and incredibly individual at the same time, it’s yet another of the set’s intriguing paradoxes. It’s a show in which every element has been choreographed with a specific purpose in mind, but which can also be interpreted in an infinite number of ways.

Before his last song, Lamar breaks the spell for a moment and reveals his work, explaining that he takes from the crowd as much as he gives back. “That’s the real reason why I wrote Mr. Morale, because everybody goes through something,” he says. Then he introduces “Savior,” the track on which not only himself, but also J. Cole, Future and LeBron James, are all billed as “not your savior”, regardless of their accomplishments. “It’s my favorite record from this album. This is [about] the true meaning of imperfection, and it’s beautiful no matter what you’re going through,” Lamar says. “Imperfection is beautiful. Then he gestures to the crown of thorns above his head. “I wear this crown as a representation, to never forget one of the greatest prophets that ever walked the earth. They judge you, they judge Christ.” He may not be our saviour, but in his adherence to Christ’s message of tolerance and love, despite a person’s faults, he follows best that he can trace the footsteps of the Christian messiah.

Then something strange happens at the climax of the set. Intensely focused up to this point, a different energy from a place deeper than before begins to bubble to the surface. He gradually becomes more and more aggressive. “They’re judging you, they’re judging Christ,” he raps again, this time adding, “Long live God for women’s rights!” His set is set just days after the United States Supreme Court struck down federal abortion rights, driven by a philosophy of rigidity and intolerance that, while often claiming Christian justification, is totally opposed to the one that Lamar preached tonight. He said the line over and over again, until he was driven into a frenzy of anger. Blood has begun to trickle down his face from the crown, and the dancers slowly arrange themselves around him to make the scene look like a masterpiece of Renaissance painting. He starts screaming with a force unlike anything else, then abruptly drops the mic and leaves us in shock. Thus ends a set for the ages.